Postgenderism: Beyond the Gender Binary (PDF)

English will turn into Panglish in 100 years - Orly?

Futurist Ray Kurzweil Pulls Out All the Stops (and Pills) to Live to Witness the Singularity
Lähettänyt Yksityisetsiva klo 23:16 Ei kommentteja: 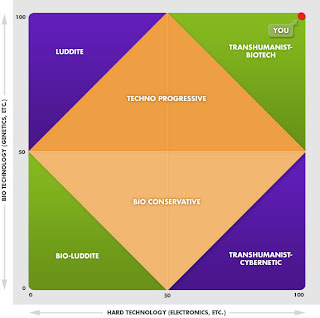 Is society ready for this pregnant husband?

How does it feel to be a pregnant man? Incredible. Despite the fact that my belly is growing with a new life inside me, I am stable and confident being the man that I am. In a technical sense I see myself as my own surrogate, though my gender identity as male is constant. To Nancy, I am her husband carrying our child—I am so lucky to have such a loving, supportive wife. I will be my daughter’s father, and Nancy will be her mother. We will be a family.

Has Science Found a Way to End All Wars?

Users needn't worry about that the system voicing their inner thoughts though. Callahan says producing signals for the Audeo to decipher requires "a level above thinking". Users must think specifically about voicing words for them to be picked up by the equipment.

A Heart Device Is Found Vulnerable to Hacker Attacks

Some doctors suggest that the modern definition of 'death' is wrong -- and that the mistake is costing lives.

Yet this debate will likely be moot in 20 years or so, says Truog. By then, he predicts, genetically modified animals -- probably pigs -- will provide all the organs we need, eliminating the need for human harvesting. If that happens, perhaps the need to define death in clinical terms will seem that much less urgent, while references to taking organs from humans will likely disappear from medical texts. "The concept," Truog wrote recently, "will have died a natural death of its own."

David Brin Rebuts Schneier In Defense of a Transparent Society

Try the "restaurant analogy." People who are nosey, leaning toward other diners in order to snoop, are caught by those other diners. Moreover, our culture deems such intrusion to be a worse sin than anything that may be overheard. Now try setting up a restaurant where customer tables are separated by paper shoji screens. This provides the surface illusion of greater privacy, but peepers can press their ears against the screen and peer through little slits with impunity.

An unsanitised history of washing

The surreptitious way people revealed their deviations to me indicates how thoroughly we have been conditioned: to risk smelling like a human is a misdemeanour, and the goal is to smell like an exotic fruit or a cookie. The standard we read about in magazines and see on television is a sterilised and synthetic one.

Iceman on Everest: 'It Was Easy'

Dr. Ken Kamler, author of "Surviving the Extremes," has treated dozens of people who tried to climb Mount Everest, and instead nearly died from the frigid temperatures. He couldn't believe it when he got word of a Dutchman making the ascent with no protection other than a pair of shorts.

Seven ways to control the Galaxy with self-replicating probes

The Next 20 Years of Gaming - Kurzweil.

As I tried to explain in the Guardian interview, the problem isn't that books are given away or that people read books they haven't paid for. The problem is that the majority of people don't read for pleasure.
- Neil Gaiman
Lähettänyt Yksityisetsiva klo 21:14 1 kommentti: